Since my /r/crashteamracing post has been removed almost immediately without any reason given, and when I asked about it, I received absolutely no response, I’m going to post my rambling here.

I’m a player of the original PSOne CTR (yeah, I’m that old), and I actually managed to reach 100% completion with it on the PS3 emulated version (don’t ask how, I’m a bad player). I’m also a senior system integrator and IT generalist with a software engineering degree, so I’m usually pretty good with troubleshooting. My previous main game was Killing Floor 2, I’ve put more than 800 hours into that one. It’s essentially an online coop shooter, so that’s been very useful to see other ways of dealing with online play.

Simply put, I consider CTR the best gokart game, period. You can imagine the excitement I felt when they announced the CTR remaster… and all I can say, I’m totally addicted to this game. Online play sure does add a lot of unique possibilities too, but boy is it flawed. I’ve only been playing for a week, but the issues are so glaring and so obvious that it’s beyond belief. To the point where having to do online matches for the daily objectives is usually not entertaining but more of an annoyance. Hence this post is born. I want this game to be enjoyable online, because “the sky is the limit”, but the execution needs a lot of improvement. So without further ado… 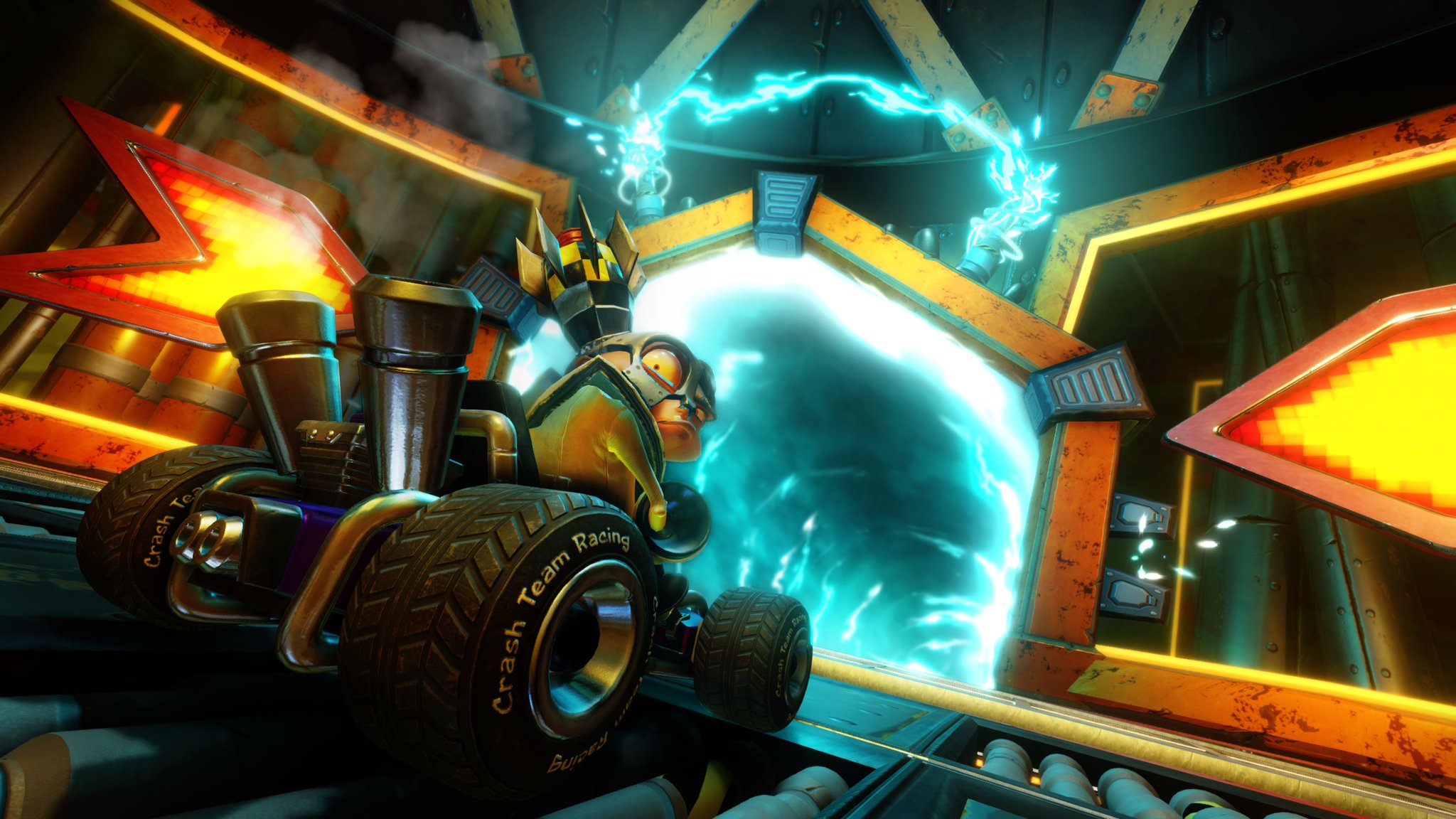 How to fix CTR NF Online

This must be one of the worst misfeatures ever in a game. There are many variables to hosting online games, like

Now, the current CTR NF implementation is pretty much one of the worst combinations you could choose:

This leads to constant disconnects during lobby, sometimes during the race, and sometimes even during the match summary, making you lose all your hard earned rewards. Yes, this last one actually happened to me just an hour ago. The screen froze, then I had to restart the game, and bam, no coins, no nitro earned.

A similar post can be read here. When you play against a better player, that’s how you improve. But when you play against an impossible player, that won’t improve your skills, it only leads to frustration and the whole game turns into a hopeless desperate grind, and you’ll just turn off online play for good. There are many examples of such burnouts, like here, here, or here. As strange as it sounds, this is also frustrating to the winners, because they see no challenge in the races at all. That’s a perfectly legit complaint. The same way you never play easy again if you already successfully beaten medium. It’s not fun, just boring.

You could argue it’s useful to make players see how much better they could get with a lot of practice, but doesn’t mean you need to put them together during races. That “reality check” is already done by simply indicating your rank during matchmaking. So anyway, CTR NF could have 3 tiers, say bronze, silver and gold, like in the GP rewards, but the names really don’t matter. What matters is that players are put together with other players on a similar skill level, because otherwise the game provides no fun. I see 2 ways for ranking players:

At this stage of discussion, the actual numbers are irrelevant, those are just pointers for now, the only thing that matters is the concept.

If you add player tiers to the mix, that means fewer players per tier and thus fewer matches to pick from. That could lead to even longer wait times during matchmaking. So how do you improve that? By having more players, of course! Since CTR NF is a consoles-only game at the moment, I see no reason why crossplay couldn’t be done, politics aside. Please, consider this. More players, more variety, more matches, more fun.

In case you missed it, this is Dingo Canyon right now. It’s obvious to detect. Establish generous baseline times under which tracks can be done legitimately by the very best, on the intended paths. If a player is well under that time, consider it an exploit until proven otherwise. The way in which that dispute can go is up for debate. One example is a player recording her laps and submitting to Beenox via a menu item in the game, but this one’s again an implementation detail.

This topic’s been beaten to death. I understand Beenox are trying to remain faithful to the original game, since this is a remaster and not a remake, but Pandora’s box has already been opened the moment you added more characters, more tracks (CNK, anyone?), more karts, and most importantly, online play, where you can’t “balance” opponents by simply tuning the AI, like in arcade play. Something must be done.

Either make the engine a class of its own, independent from the character (aka “engine swap”), or do some serious rebalancing. Like accel class should receive more boost from slides, trick jumps and boost pads, turn characters should get even better handling (turning effortlessly on Dragon Mines might be a good aspiration), just do something. I understand it’s extremely hard to do justice, since different tracks will favor different classes, but as of right now, all tracks favor the speed class, so at this point, this could only get better. I’m not saying an excellent player can’t win any matches with balance/turn characters. But if we put 2 players on the same skill level together, it’s definitely the speed one winning, except for a few corner cases.

Since it’s hopeless to have all players press that button, it’s pointless to even try. In fact, it puts you at a disadvantage, since the ones not skipping know exactly when the lights come down, so at the end of the day, you end up not skipping either for predictability (and also because you might risk accidentally switching the turbo gauge, it happens to me all the time).

I understand the game has to wait on all players successfully loading the track, but I’m fairly certain that distribution is smaller than 15-17 seconds (that’s how long the intro takes). We’ve all seen the intros. A million times. It’s tedious, and we don’t need them. If newcomers still want to watch them, they’re free to do just that in arcade or adventure. It doesn’t add anything to online play besides frustration and boredom.

We like to spend time with polishing our karts and characters, don’t we? So why the rush? I don’t see the point in not allowing players to customize their karts before the match.

In fact, I also don’t understand why I have to set up my gear both for adventure, arcade, and online play. Once. If there was an option somewhere to make it global, applying to adventure, arcade and online, that’d be great. Customization could definitely have its place in the main menu in my opinion.

Skip wait if lobby is full and track is decided

I don’t understand why every player is forced to sit through another 30 seconds, just for the sake of waiting. There’s no chance we’ll change the track, there’s no chance for more players to join, there’s nothing that could possibly happen. Again, this extra wait doesn’t add anything to the experience.

This would incentivize players to quickly make their choices instead of going back and forth constantly.

By the way, the extra wait is particularly useless if you implement global customization as explained in the previous point.

Start loading the track during the last 10 seconds of lobby

So that we have to wait less during the loading screen right before the match actually loads up. This might already be happening, but I’m really not sure.

I understand the motive behind not letting players actually pick the track. You don’t want people to perfect just one track and then play that all the time. That’s a good thing.

But when I have to deal with constant disconnects and RNG for more than an hour to finally be given the option to even vote for say, Polar Pass to finally finish that daily challenge, that’s again just another great way to rub players the wrong way.

I think it is only fair for the track first receiving the most votes to win. But the game currently has a bias

It’s a nice concept, but only works in the traditional arcade and adventure modes, where the skill level distribution is way smaller. In online matches, it’s often completely useless, because players are actually faster than the Orb.

It’s particularly problematic when there’s an exploit on the map. Other times the Orb simply skips certain players, even when going on the legit path, which is ridiculous, and I can’t recall such an instance in the original PSOne version, so you should fix at least that issue merely for the sake of being faithful to the original game.

Show carts during the podium scene

This is just a rehash of this post. It’s such an obvious addition. This one’s not an annoyance, but would definitely improve the online races a little.

Welp, that was a mouthful, folks. Please let me know what you think! If I read something sensible, I’ll be sure to add it to this list. I’m really hoping Beenox will improve this game over time, because it has so much potential. Please refrain from blaming the devs. I work for a software company, trust me, things can go wrong on any level, it can be an idiot project manager, a blindfolded executive, anything. Let’s not point fingers but provide constructive criticism. GL HF!

P.S.: Thanks for the good points, Superjustinbros!