In part 1 I focused on ccminer, because NiceHash was unusable at the time. Now it seems NH got their act together, as the newest version seems to run just fine on the Titan V with the newest NV driver. Specifically:

I didn’t have a single miner carsh on stock clocks, so we’re definitely getting there. GPU usage is smooth and consistent (the drops are algo switches): 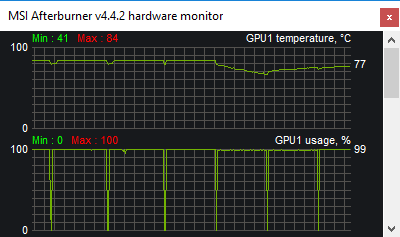 Before we get to the numbers, I have to say: the V was totally not made for overclocking. Even if I increased power limit to 120%, +100 core and +125 memory was the absolute most I could get out of it. Anything higher resulted in constant driver crashes, BSODs or miner errors. DaggerHashimoto was the biggest problem child in this regard, it crashed even when other miners ran just fine. Maybe these problems will be ironed out in future miner/driver versions, time will tell.

So anyway, here’s the numbers:

Can’t wait to re-test these with newer driver and miner versions, so stay tuned. Until next time, take care!