So I decided to give SFB Server 2015 (previously called Lync Server) a go because I’m getting really tired of our old Catalyst 2911. I completed several of the preliminary steps, but when I finally got to actually install something, it failed on me pretty hard: Okay, so I checked the KB article, TL;DR I need to install KB3013769 from December. That’s quite strange coz the very first thing I did was to install ALL available updates, but whatever. I grabbed the offline installer anyway, started it on the test server, and guess what? 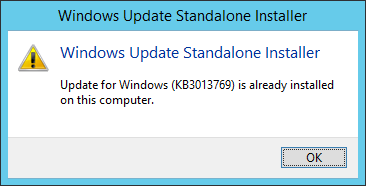 Dead end. I have no idea what to do now, other than complaining and arguing on MS Connect for months, of course. I’ll let you know if I figure something out.